When I first set eyes on a copy of "The Enticing Legend of the Massa Warriors", I thought the author had employed the word “enticing” simply to pull a fast one on the reader. But I was mistaken. Once I started perusing the work, I noticed that the lines were so luscious as to warrant me to get the very last page before I could drop it.

The first thing that glues the reader to the book is not so much the alluring front cover page picture of a female warrior on horseback as the epilogue which is a quote from one of the works of Africa’s all-time best storyteller, Chinua Achebe. It reads: “I believe in the complexity of human story, and that there’s no way you can telle that story in one way and say, “this is “. Always there will be someone who can tell it differently depending on where they are standing… this is the way the world’s stories should be told: from many different perspectives”.

The epilogue is therefore, the ornamental door through which the reader passes to delve into Irene Gaouda’s Exciting world of storytelling, which is the integral part of the African culture. For, as the songwriter puts it, “Storytelling is part of our culture/We must always recount to our children/ The story of our forefathers/ For it is part of our culture”.
Part one of the well-bound 89 pages book is the story of Laouda Soa, an inspiring old woman known more popularly by the sobriquet Ada. Besides being a great grandmother, she is the oldest woman in Kartoua- a vast village in Vele Sub-division, Mayo-Danay division of the Far North region of Cameroon. Despite her overly advanced age, Ada’s extraordinary physical and traditional qualities confirm her as a woman of gravitas who is overly useful in the village. For instance, in the words of the author, “During rainy seasons, at sunrise, the old woman hugs a hoe and a calabash of millet. Painfully, but surely, she moves step by step towards her plantations and sows". “Also, she takes the cattle out every morning for good food”. Having learned midwifery during her childhood when most localities in the area lacked medical facilities, Ada is the “doctor” of the village as she has assisted in the delivery of many a villager, including the 10-year-old Falita Félicité nicknamed Fifé, who happens to be the narrator of the legend of the Massa warriors.

Part 2 of the work is, of course, The Legend itself. The dictionary meaning of a legend is, a very old story or set of stories from ancient times, or the stories, not always true, that people tell of a famous event or person. That is exactly what we see in this section of the book. It is about the exploits of a squad of five intrepid female massa warriors of Goumgaya – a land with walled cities located near River Nile and built on top of man-made mounds overlooking wetland areas.
The warriors are Sawalda, Gasida, Yilaoussou, Moulda... After having liberated a people referred to by the writer as the Hybrids, from the hands of a monster, in a fierce battle in Egypt that lasted one century, the warriors return to Gougaya only to discover with shock and consternation that their families had been wiped out, just a few days before, by a group of weird people with heavy weapons, sent by a wicked king. 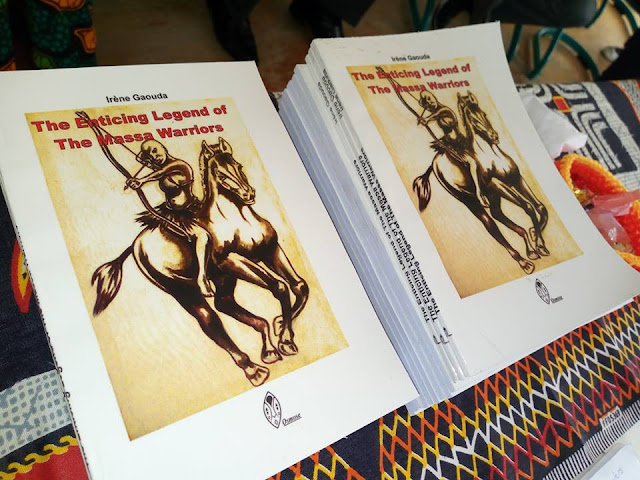 Courageous as they are, the girls resolve to avenge the killing of their families. So they set out a journey to capture and eliminate their enemies. The journey turns out to be quite eventful. After travelling for many years without finding the enemies, they were tricked by a strange and bogusly hospitable woman who told them that the former had escaped to the other side of the River Logone. The five warriors then embark on a journey to the area and are eventually engaged in a bloody fight by a giant monster that emerges from the river and on whose side the trickster old woman is. The monster do kill the warriors one after the other until just one is left- Sawalda. She ends up giving birth to a baby in a strange land where there are only animals.
The final episode of "The Legend" reminds me of the famous British Poet Laureate, Ted Hughes, who uses mostly animal characters in his poems to explain human values; to lament the human struggle and the human condition.
A prologue naturally closes Gaouda's book. It is a sort of tribute to the diversity of the African population drawn from the work of Sarah Tishkoff, the geneticist who had/has joint appointments in the School of Arts and Sciences and the School of Medecine of the University of Pennsylvania, USA. She writes: "There is no signle African population that is representative of the diversity present on the continent. Therefore, many thnically diverse African populations should be included in studies of human genetic variation, disease suscetibility, and drug response". This reveals the author as a true pan-Africanist, isn't it?

LESSONS DRAWN FROM THE ENTICING LEGEND...
First is the glaring contrats between tradition and modernity in the African context. Ada, the main character of part one of the work, represents the virtues of tradition which are opposed to the ills of our day-to-day experiences of the today. She has time to take care of and entertain the younger ones unlike our adults of today. Let us get the contrast as captured by the author: "Every evenving, the old woman gathers us around the fireside. You knwo how stressed are adults nowadays with their endless sentimental and financial problems! They run after money, but still, there is a lot of poverty around the corner. They run after women, but still there are lots of signle people hanging out. So, what do they want? Why can't they save time for us?

Second, (I think this should even be the first lesson) is that the art of storytelling should be encouraged and promoted on our continent in order to enhance the African culture.
The third lesson to draw from Irene Gaouda's book is the fact that the issue of marginalization of the woman or the women being the weaker sex is not an African thing. Otherwise, how do you explain the admirably extraordinary actions of Grandma Ada and the valiant feat of the five young ladies who fought a battle for one hundred years and won it?

Furthermore, there is the issue of continuity. By making Sawalda put to bed at the end of her legend, Gaouda is letting the reader to understand that after all the wars and plagues in society, after all the trials and tribulations of life and world may result in deaths, life will not cease to exist in Africa in particular and the world at large. Life will continue.

Last but not the least is the importance of animals to human life. All the help that the different animals offer Sawalda before and after she gives birth point to one thing: there is more in animals than meets the eye. The author uses animals to emphasize the fact that altghough they are lower in the natural order of things, animals are very useful to humans and will remain their lifelong companions.