- mai 14, 2019
Delphin Neo gave up the ghost on Monday 13th May 2019, in Douala. Immediately after the announcement, tens of artists, family friends and other professional relatives took to social networks to pay tribute to the deceased.

Mary Sherman, Founder and Director of Transcultural Exchange, who had excellent professional ties with Delphin Neo, expressed deepest sympathies as she said “This is devastating news! I am so, so sorry to hear that. What a great loss”, she said.
Komol Sipora, a Senegal based friend, was speechless:“It’s above my understanding, I mean, this is terrible! He once said he was sick. He said he was not feeling okay. But then we thought, since he's a positive person, he's going to recover ASAP. Alas! Now, I am convinced that he remained positive until the end. We had the chance to interact with him during his stay in Dakar and, from him, I've gathered very positive memories. He had the intellectual comfort each and everyone would have loved to possess. I still have the work of art he (almost dashed) me, it's a portrait, my portrait..."
Expressing gratitude to the painter, young poet, Yanik Dooh wrote: 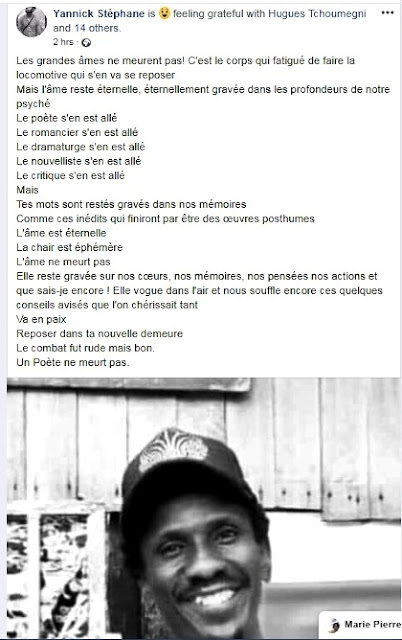 Isaac Iboi, playwright who has been in collaboration with Delphin on past projects said he was shocked by this sad news. Senegalese-born artist, Ibrahima Thiam, praised the artistic qualities of the deceased recalling past experiences in 2017 and 2018 in Dakar.
Delphin Neo was a Cameroonian writer, painter and cultural promoter who lived and worked in Africa. He was known as the President and Co-Founder of OSMOSE, an African Cultural Association and Scènes Experimentales, an international biennial, founded in 2009.
In an interview to CultureEbène, he specified that, the idea of creating an association came up in Douala following an inheritance that its first constituents (by the time) wanted to prolong within the framework of the "Canal Exchange Culture" meetings which gathered Delphin Neo, Gustave Bin, Aggex Naba'B, and other laureats.
If Delphin Neo was then the administrator, the latter however underlined that the association was created by Miss Ngo Ntamak Rosine (of late) with the help of some artists and communication experts.

In 2012, he started paleontological explorations focusing on the Toumaï cranium, discovered in 2001 in the Djourab Desert to help explain the role of ecology in artistic practices.

In 2017, he began an excursion to Senegal to perform some preliminary works for approaching the Goree people and slave descendants to further his art and ecologic practice. Many of whom took part to the 4th edition of Scènes Experimentales organized in Dakar, shared memorable moments with the young man during the Master Class hosted by Sup Info, the Symposium on the ecological size of african art held at the Goethe Institute as well as events organized at Dakar's subburbs by his association.
In February 2018, Delphin Neo was guest of the Transcultural Exchange International Conference on opportunities in the arts, in Canada, to explore new artistics horizons.
http://www.transculturalexchange.org/2018-conference/bios.htm
Earlier before, in 2015, he gave himself the challenge of writing a 400 pages essay entitled “Les maux des arts et de la culture au Cameroun”. The book which was presented at the Muna Foundation, in Yaoundé, was made public in collaboration with Arterial Network Cameroon. http://www.spla.pro/file.book.les-maux-des-arts-et-de-la-culture-au-cameroun.16510.html 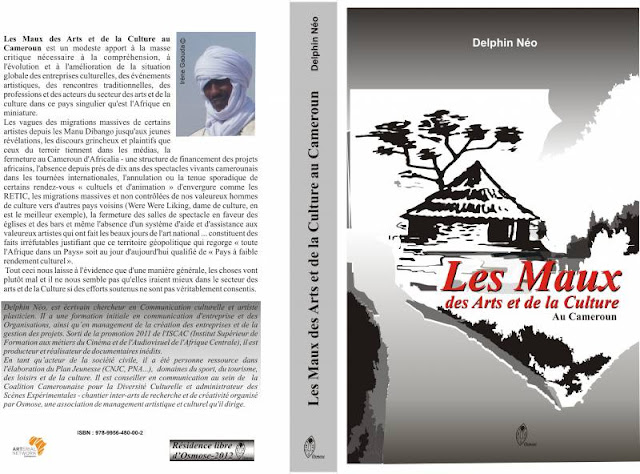 Passionate and hard working, he implemented a project in Yaoundé with the aim of publishing the works of young artists with focus on Novel, Slam, Poetry, and Plays. He leaves behind a series of unprecedented works and tens of helpless young artists.
Adios, el artista!