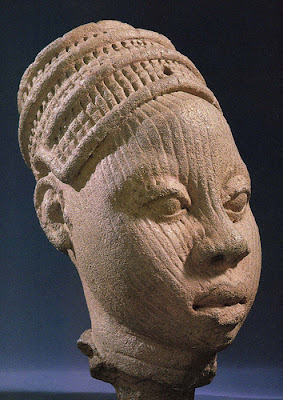 The Yoruba live in south-western Nigeria and in south-eastern and central Benin. According to many historians, all evidence indicates that they came from Ife, which is the centre of inhabited world in their mythology. It was there, in any case, that the first kingdom in this part of Africa was established, and the other Yoruba kingdoms were modelled after it. According to their oral tradition, their founders were the sons or grandsons of Odudua –all of the Yoruba call themselves “the children of Odudua”- who gave firmness to the earth and built the town of Ife at its centre. When he died, his possessions and domains were divided among his sons. The youngest Oranyan, was cunning enough to keep the throne of Ife, which he entrusted to a regent, for himself. After a long period of adventurous wars, he founded the kingdom of Oyo, which dominated a large area of the country from the seventeenth to the nineteenth century. Besides the king of Ife, there were seven “crowned kings”. The crowns were actually headdresses enlarged by tight networks of pearls which veiled the sacred faces of the rulers. The descendants of these kings retained the privilege of wearing the crowns, although many of them played only minor roles while the uncrowned chiefs carved out powerful states for themselves. In spite of their strong feeling of a common origin, religion and culture, the Yoruba were never unified in a single political organization.

According to Paul Mercier, the Yoruba mythology, with its “201 gods” is one of the richest in West Africa. There is continuity between the divinities, the kings and the ancestors. Odudua reigned at Ife and Shango at Oyo; several of the divinities are ancestors who specialized in a particular task and the control of a section of the universe. Except for the great organizing powers of the world, the same divinity can be either major or secondary, depending upon the place. The outstanding figures in the pantheon are: Shango or thunder, Olokun or the sea, Shokpona or the earth, Oko or agriculture, and Ogun or war and the forge. Around each of these gods or around clusters of them, cult groups are organized which can be joined through initiation, the gods “mount” their devotees during a ritual of possession. Both Eshu –the messenger of the Gods, who is less a spirit of disorder than of accidents, of imagination and, through this, of liberty, the “hidden companion” of all gods and men- and Fa-the fate that is questioned in divination- have a special place in the pantheon. 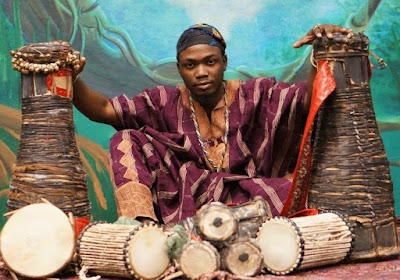 The Yoruba land was one of the most extraordinary centres of art in all Africa. Stone, terracotta and bronze sculpture, which flourished at Ife before the thirteenth century, are all astonishingly classical in style. Religious, court and popular art existed side by side. Stone sculpture continued for a long time, and is indicated by the hundreds of heads discovered at Esié, which are thought to have been saved from the sack of the ancient town of Oyo. Metalwork by the lost-wax process declined more quickly, and eventually only jewellery and the edan, brass figurines that indicated membership in the Ogboni society, were produced. Sculpture in wood remained vital until modern times. I.G