- avril 05, 2016
If some people consider it as simply decorative, body painting art tends to be mystical, a symbol of paganism. 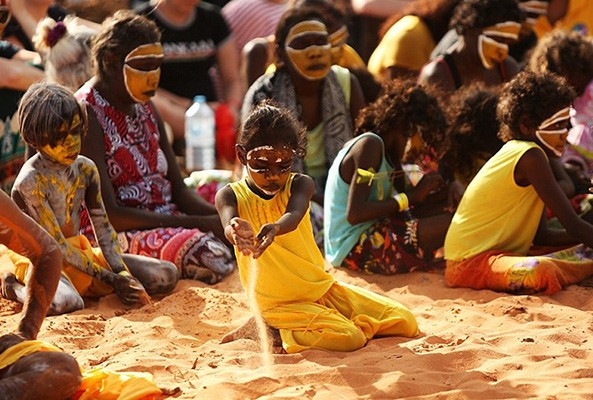 On feast days, even currently, men and women anoint their arms, legs and entire bodies with palm oil or vegetable butter so that their skins glisten with a special brilliance that is a sort of decoration in it. To the reddish palm oil is often added a paste made from bark, which is also red. In a study carried out many years back, Denise Palm came to the conclusion that inhabitants of Central Africa keep their nkula powder in decorated wooden boxes, or they moisten the paste and melt it into the shape of a lizard or tortoise. “Red is the symbol of life, health and joy. The bodies of young people, girls and boys, are dyed with nkula for the celebration that mark their entry into adult life”, she disclosed. Red powder is also put on the bodies of the sick to hasten their recovery, and it is robbed on the bodies of the dead as a last mark of respect when preparing them for burial. While red, the colour of blood signifies strength and life, white is often the colour of the dead and of ghosts. White represents mourning and affliction among the living, as soon as a death is announced; women not only tear their clothing and ruffle their hair, but roll in mud and stain their faces with white streaks. However, white may also be purely decorative. To make white paint, clay is mixed with water and decanted. Before it gets dried, it is kneaded into a ball as a big a first, and water is added once more. The sticky paste is then traced onto the body with the fingers in regular patterns. At one time, the Basonge of RDC held sacred dances for three nights running, at the beginning of the new moon ; the women would dance and the men would look on, both with white circles around their eyes and white red flames painted all over their bodies. 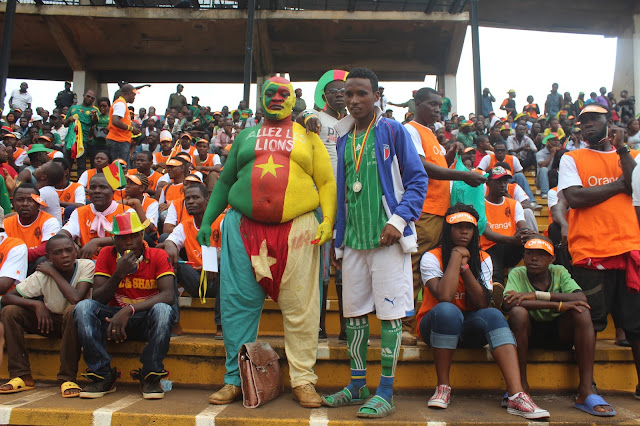 In Cameroon for instance, when a football match is scheduled to hold in one of the various stadia of the country between the Indomitable Lions and a foreign team, members of the Lions’ fan club paint their bodies in Green-Red-Yellow, symbol of their attachment to the Nation. “We are the Lions! And when a match is organized, we put all the chances by our side by painting our bodies, to prove that we are invincible. It has an effect on our opponent, you wouldn’t imagine, but it works”, Remy Ongtogo, a Yaoundé resident once declared at the end of an encounter. How truthful this has been proved, Remy wasn’t able to tell us. Strange though it may be seem, black dye is also often used. During her research, Denise Paulme also found out that the Mangbetu women in the Congo draw black designs on their bodies with dye made from the juice of the fruit of the gardenia. Their well-proportioned designs depict Maltese crosses, bees, flowers straight and broken lines, ribbons and knots. This is all purely decorative; But much more frequently, color is meant to convey a message. During the period of retreat following their initiation, young Mandja in the Republic of Central Africa rub their bodies with crushed charcoal powder or with the sap of special roots in order to imitate warriors, who daub themselves with soot when they set off on a campaign against a neighbouring village. White for the Mandja is on the contrary, the colour of purification. Initiates, returning to the village, are no longer the same as when they set out; they have crossed a threshold of life, henceforth, they are men. They too, whiten their appearance with clay, drawing lines or points on their bodies and some are even white from head to foot. In addition, painting the face and skull may be a substitute for a mask. Among the Kissi of upper Guinea, who do not carve in wood and have no masks, the young men, emerging for the first time after undergoing the toma initiation, appear in Indian file, heads bent, their nude bodies completely whitened with chalk. However, one of them chosen for his small stature wears a fibre cloak down to his knees, which hides his arms and his face and shaven skull are painted with red and white design. 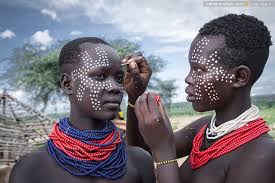 Nevertheless, many people do believe that body painting is the incarnation of paganism. Omar Miya, student, is more critical when he declares that: “all those signs and symbols have no effects on the lives of African. It is purely pagan and relevant of the past. If body painting had something positive, then Africa would have been a disease and war free continent”.