- avril 08, 2016
The Senufo live in an area divided today between the republics of the Ivory Coast, Mali and Burkina Faso. They have not always occupied these territories; most of them came from the north two or three centuries ago. 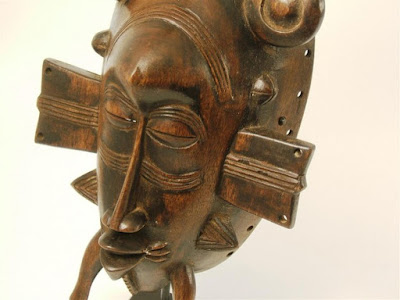 in an article published in the D.B.A.C, Denise Paulme was stating that the Senufo managed to live off poor soil which they cultivate with the simplest implements. Their social structures are equally simple: the villagers lead closed existences and are unconcerned about the world outside; preferably; marriages unite different lineages of the same village. In another form of union, the married woman continues to live with her own people and her husband joins her two or three evenings a week; the children of such unions belong to the mother’s lineage. Besides the village chief, there is a “master of the land” who is a representative of the first inhabitants and primarily a priest serving as an intermediary between the visible and invisible worlds; the earth is a divinity, not an object that can be owned. In the Senufo lands, each village has a sacred wood with a clearing that only the initiated may penetrate and where attributes of the Lo (Organization) are kept. These are masks and sculptures that invade the village when the society holds its festivals, initiations, funerals, rites marking the end of mourning and agrarian festivals. The ancestors preside over all these activities. The masks have several functions. Those representing ancestors barely cover the face. They are naturalistic in style, but do not attempt to be reproductions of human faces and cannot be considered portraits. A heraldic symbol – bird, chameleon or bunch of palm nuts- crowns each mask and indicates the caste or group to which the wearer belongs. The bet known of the great composite masks is a combination of antelope horns, the muzzle of a carnivore and the jaw of a crocodile. The sorcerer hunter puts it on his nocturnal expeditions. Armed with a whip and spiting flames of burning hemp fibres, he leaps about to the sound of horns and spreads terror around him. 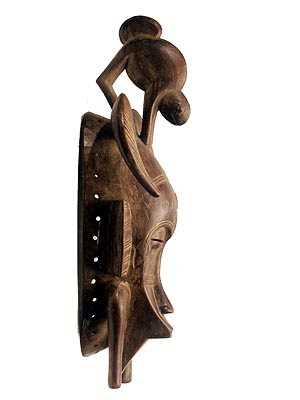 The large Senufo statues are among the masterpieces of African art. They are ancestor figures, and the newly initiated, during their night processions, pound them against the ground as they pray to the Great mother of the village, Ka Tyeleo, to grant them her gifts of abundant harvests and numerous children. Their use explains the elongated form of these statues, which are midway between the extended forms of Sudan and the more compact statues of Guinea. Smaller sculptures are used for divination and fertility rites. The styles vary considerably from region to region, and the subjects include mother and child, horsemen, seated and standing couples and hornbills, with their long beaks curved onto their protruding carved in the form of two long rectangles. According to Senufo mythology, the hornbill was one of the first five animals to appear on the earth, along with the chameleon, the tortoise, the snake and the crocodile; it was the first, too, to be killed for food, and it is the hornbill which carries the souls of the dead to the other world. In spite of their weight, the large hornbill statues ( some are more than four feet high) were carried on the heads of the novices at the Lo ceremonies, during which they represented the living forces of the universe.